Differences between the electric guitar and the harp

By Gonçalo CrespoAugust 10, 2019 No Comments

This article was written to shed some light on the differences as well as commonalities between the electric guitar and the harp.

If you never saw a harp, this is what I am talking about: 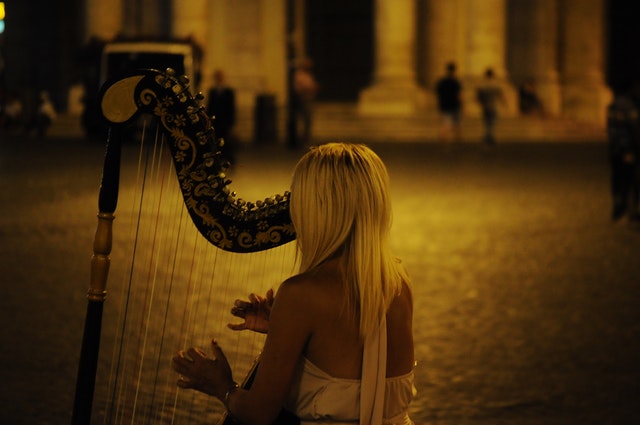 The harp and the electric guitar are very similar in this regard. Both are instruments with strings, that are being plucked. The harp is even closer to the classical guitar, since classical guitar is almost exclusively played with fingers, just like the harp.
In contrast to the classical guitar, an electric guitar is usually played with a guitar pick, to put the strings into vibration.
The harp has one string for one note and that note cannot be manipulated, at least not in the obvious way as on the guitar, where you shorten the string, thus increasing the pitch, by pressing it down to the fretboard.

Compared to the classical guitar, the harp can have a similar sound, especially when chords are played in a single note fashion one after another, as one would play on a harp. And this is also where the word “arpeggio” derived from: it means “[played] like a harp”.
It gets even better, when you play arpeggios on the electric guitar especially when they are played cleanly. Virtuous guitar players can make their guitar playing sound almost exactly like a harp.

If you are playing the classical harp, that is used in orchestras, you probably will have a hard time transporting your instruments to your concerts, because it is quite big and heavy and needs to be put in a specifically designed harp case.
You could get a smaller harp though, with which you would be limited to only one key.
Opposite to that, you can carry your guitar almost anywhere and anytime without much of a hassle. Sometimes you get into discussions at the airport and you will need to give your guitar to the baggage handlers and hope for the best, so in that case it is a very good idea to check with the airline first.

Playing the harp does not really enable you to play a whole bunch of other instruments. What comes to my mind here is that the motion with which you pluck the strings on a harp might be useful for learning classical guitar, but from my observations this is where it ends.

(Disclaimer: I never played the harp, I only try to explain my own observations and thoughts after talking to harp players and watching the play)

If you never made music in your entire life, it can be a bit of a challenge to learn to coordinate both hands and fingers to play a series of strings at the same time.
Whereas with the guitar, you also need time to get used to using both hands, but you are using them in a different way each: one hand plucks the strings and is responsible for the rhythm and one hand is responsible for pushing the strings down to the fretboard.

The harp has a series of pedals at the bottom with which you can alter the tuning, to match the key that you currently play in.
If you want to transpose on the guitar you simply use a capodaster or you learn how to transpose by shifting your scales and barrechords up and down the fretboard.

Hope this was somewhat interesting for you!

About the author:
Michael Korte is a guitar teacher in Kitaratunnit Tampere and puts a lot of focus on learning how to get advanced while developing fun with your practice habits.

6 Ways To Improve Your Sight Reading On The Piano

6 Ways To Improve Your Sight Reading On The Piano